Leaving for my first London College of Fashion course on Monday morning - accommodation sorted; meeting a photographer to get some ideas on the go on Tuesday night, meeting Carly who runs the second course on Wednesday for the first class of that course, meeting another photographer on Friday and then home on Saturday.  I think I'll stay in bed all day Sunday!

I'm excited as a kid but nervous.  I've put a lot of effort into getting my portfolio as ready as I can, started on some good networking already - I messaged a stylist who's just graduated with a BA Hons in Fashion Styling from Istituto Marangoni London to see if could work with her as an assistant and she was lovely.  After seeing my website she messaged back with "Work looks great. I will keep you posted on the shoots I do and if you're around you can definitely help." I'm making good impressions!!

It's making me a bit anxious in case it doesn't go right but I've got to remember to keep a calm head and this time round I'm going there to learn, and going to prestigious places so it's going to put me on the right track to where I want to be. Gotta remember! I'll be fine, it's a whole big adventure and a new lifestyle opening up for me. You can see why I'm excited and nervous!
at August 26, 2016 No comments:

I've been busy getting my portfolio London prepared for my first styling course next week at London College of Fashion which I'm so looking forward to :D  I've been getting really high standard shoots done with great teams and I'm happy to put some images from these shoots into my portfolio.

The first was a lookbook shoot for up and coming designer Alice Cait who I came across when I was planning the Checkmate show and I wanted to put shoot together with her beautiful crisp white modern designs.  We shot around Glasgow's west end on a lovely sunny day, and the fantastic Hillhead Bookclub very kindly let us use a lovely space upstairs to get hair and make up done.

Next up was a very pleasant surprise shoot for an American photographer Matthew Calbraith Butler - it was a surprise message from a model friend to find out if I was available on the Friday which I was, and waited for a phone call which didn't come until the last minute on the Thursday evening at 10.30.  I had a chat with Matt who described what he was wanting which was a floaty dress or skirt and bold jewellery, luckily Karen and I had the pieces between us and Matt was really pleased. It seemed pretty impromtu, we got her make up done in Boots on Princes Street then made our way up the very steep cobbled street at the top of the hill with heavy suitcases...
.
We shot in the Turret at The Witchery on Edinburgh's Royal Mile, a stunning opulent suite.  This was for an exhibition that is being held in Miami in December and the camera is a scanning camera and captures an image as it goes from right to left and this means cool effects can be created by moving parts of your body or clothing to elongate it without the person creating the effects being captured in the shot as long as they move in time! What I was seeing on the laptop looked great.  The images are to be made up to be huge - small wall size - for the exhibition so they had to be incredibly good.

Then just last week I did another lookbook for a little known Japanese designer Toco Fashion living in Scotland who also showed at Checkmate and has made a collection of absolutely stunning hats and striking cocktail dresses.  Again we shot at Hillhead Bookclub which is a fantastic location. 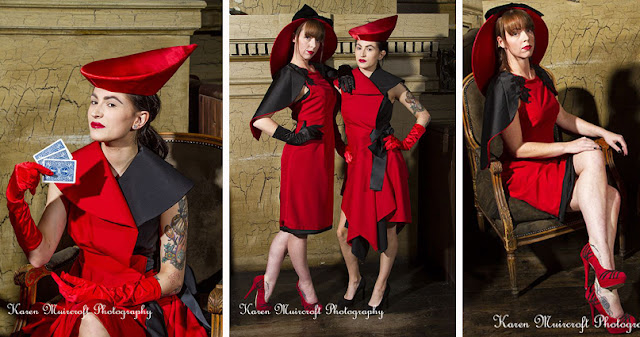 So it's been a very productive few weeks in prep for a mega busy week in London, with the London College of Fashion editorial styling course, meeting Carly Brook who runs the London College of Styling course which is the other one I'm doing, plus meeting a couple of photographers and planning shoots with them.  After that I've got a contemporary jewellery shoot and a sportswear editorial planned!  All go and it's amazing :)

After enjoy a lovely spa day with bestie Leanne nearly two weeks ago - when I wanted to take the swimming pool home with me :)  - I enrolled on beginners swimming lessons, first class was last night. Nothing to report apart from that it was fun and I did ok (and man, such hot men!!) but I'm on a body-care plan and had a wonderful hour long massage today.  I've not had one in probably at least 18 months and my poor shoulder muscles are tight as can be, closely followed by my calf muscles, but it was fantastic and I'm booked in for another in 4 weeks time to help my poor battered body.

Here are my favourite pieces available from Shoppist that I've collated this week.  All are from Street Style Store.

These first items are beautiful sharp and elegant black and white pieces softened with floral print. 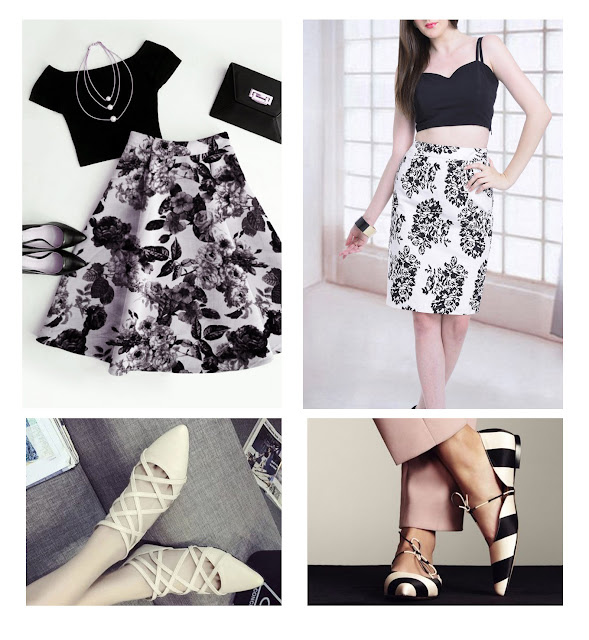 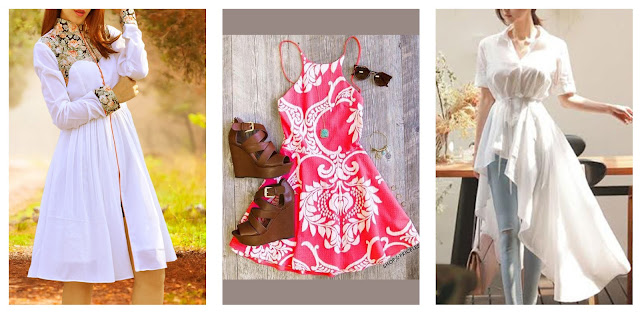 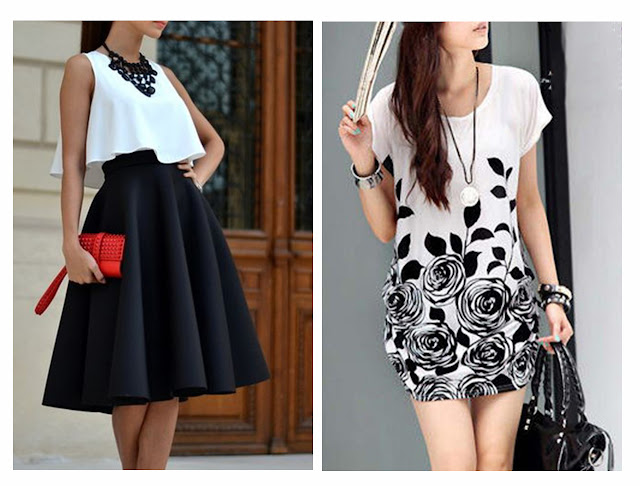 Dopamine, the ego and creativity

I found this article today which backs up what I've been thinking and saying about how fulfilling (or not) your life is, and how the ego needs sustained by methods to keep you motivated, and reading here shows how dopamine has an effect on what stimulates and fulfils people.and the best ways to achieve this.  Basically, low dopamine encourages addictions like shopping to make you feel good in the long term but creative interests provide a natural long term release to make you feel good and motivated by your productivity.  I think this sums up my debate of ego vs self belief well.

1. Don’t Get Addicted
“Many people get addicted to something because it gives them some kind of instant gratification – drugs, alcohol, sex, pornography, shopping, and other addictive behaviours actually have the opposite effect on dopamine levels in the long-term. In essence, when we get overly addicted to something, the ‘reward circuitry’ of our brain kicks into overdrive and we crave the ‘quick hit.’ This is not a sustainable solution for dopamine production, which can and should be done naturally.”
What’s missing here is the fact that addiction is quite often a result of low dopamine, meaning addiction is more of an attempt to fix an already existing problem. In essence, “the underpinning of your addictive personality is a lack of fulfillment from within, with a resulting urge to achieve fulfillment through substances, objects, or events that relieve the inevitable pain – for a while.”(source)
“When we receive a reward of any kind, dopamine is released in our brains. Over time, this stimulus and release of dopamine can lead to learning. Researchers have recently found that how quickly and permanently we learn things relates directly to how much dopamine we have available in our brains. As we get rewarded over and over again for something, we learn that we should keep doing whatever that is very deeply, and it’s hard to unlearn those kinds of behaviours.” (source)
What this means is that low-dopamine is a response to a lifestyle which doesn’t offer much in terms of reward to the person living it. It may be a response to the environment you’re living in, the clothes you’re wearing, the tight budget you’re working within, the relationship choices you’ve made or have been made for you, or a result of trauma where there was no perceived reward. It’s very easy to understand how dopamine levels may appear low when we consider all the potentials leading to less-rewarding lifestyles and life-experiences.
What’s necessary then is less of a ‘don’t get addicted’ approach and more of an ‘increase the rewards in your life’ style of applied advice. Fact is, you’ll constantly feel less fulfilled through low dopamine when you’re not (or are unable to) fill your day with things that inspire and reward you. Meaning, the most effective protection against addiction and greatest advantage to high-dopamine levels is a defense against low-rewarding activities and an offence working towards rewarding actions, activities, and ultimately, a lifestyle of fulfillment and achievement.
Also, because addiction is most often rooted in past traumatic experiences, where emotions create a fight or flight response that becomes rooted in your core emotions, it’s vitally important to seek proper and effective help in dissolving past trauma. Doing so can only help you perceive more rewarding experiences in your life, rather than filtering experiences through a ‘traumatized’ awareness.
3. Create Something
“For us writers, painters, sculptors, poets, singers, dancers, and other artists, we can identify with this. When we’re in creative mode, we can become hyper-focused. As a result, we can enter a state called flow. Dopamine is the brain chemical that allows us to achieve this state. The lesson is this: take up a hobby or activity in which you actually create something tangible. Try something like arts, crafts, auto repair, drawing, photography, or something else that sounds interesting.”
Sparking your creative drive is an effective way to increase your potential for feeling great, achieving goals and inspiring yourself through your accomplishments. However, it can also be a distraction from a feel-bad lifestyle, if it’s not maintained with a purpose in mind. Whenever you’re working on a project, creative or not, that truly inspires you, you’ll activate your ‘flow state,’ where time and space seem to stand still. So how to you determine what it is that truly inspires you?
The most important goal in revealing your most authentic creative energy is to remove the creative energies of other people from your life. So many of us look up to the creations of others, whether works of art or music, and their works or talents take up time and space in our own minds. This isn’t necessarily bad, but it can influence your own beliefs about what you can create. If you compare yourself to others and minimize yourself, you’ll repress your own creative ability. This can affect your dopamine levels, because if you can’t see your own creations as rewarding to you, as much as someone else’s, you’ll feel inferior and incapable.
One very effective way of neutralizing the influence other people have on your mind is to literally look at the negatives or downsides of their accomplishment. This isn’t to practice being a critic, but it can enable you to de-infatuate with their creative powers, helping you to stop minimizing your own. Once you recognize that your creative endeavors can exist on the level of those you admire, through practice (just like they did), you’ll increase your ability to see your own creations as meaningful and rewarding.

So, to avoid having to regularly boost the ego to be a happy person, get creative and accomplished and gain self belief.
at August 04, 2016 No comments: