Westender anniversaries all round!

As Westender magazine hits it's 10 year anniversary, this month marks a year I've been working on the mag, and it's all the issues I've worked on which can be read online.

I change my mind from time to time on which is my favourite shoot, my best ones are on my website.  All have been great to work on, I love working with the Westender team, always so organised, professional, friendly and easy going.  We all know our stuff and gel well.  All the models we've had have been fantastic, from braving the weather to not-quite-managing steps in heels. 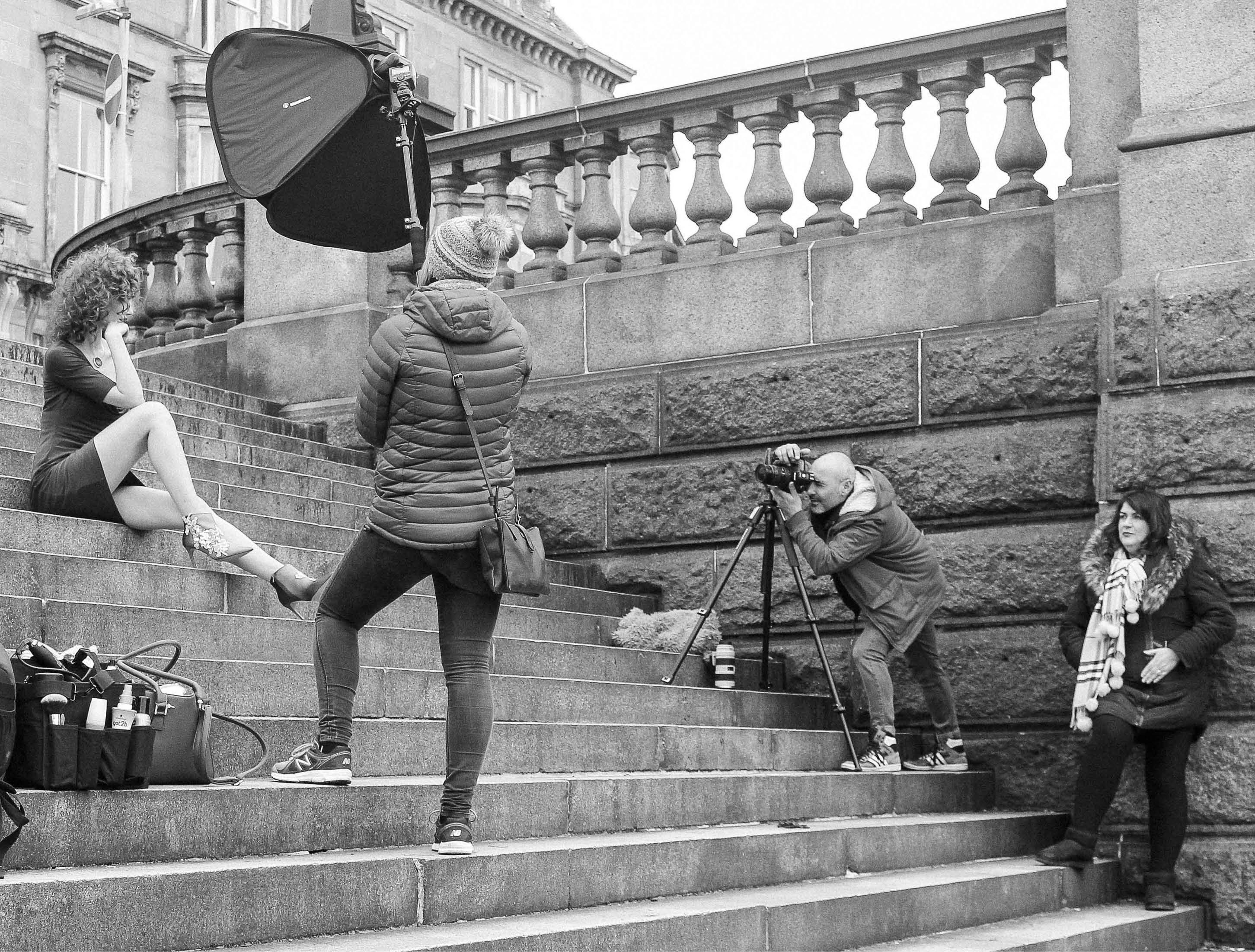 There's something about the first one I always love, very classic.  We had two of my rabbits on set for the Spring 2018 one, such well behaved bunnies who were happy to pose - it's in the genes, their sister has been photographed for a Vogue China editorial three years ago.  I love the metallic trend, and was really pleased to get the chance to do a metallic themed shoot last Autumn. 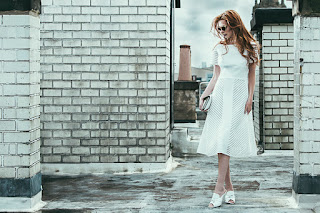 I've loved developing relationships with the boutiques in the West End, and bigger stores in Glasgow, it's good to catch up with the people I'm getting to know every couple of months.

Here's to working with a brilliant team on a splendid magazine for plenty more years.

Here's a great conversation between Oprah Winfrey and Rupaul - such an insightful and inspiring person. 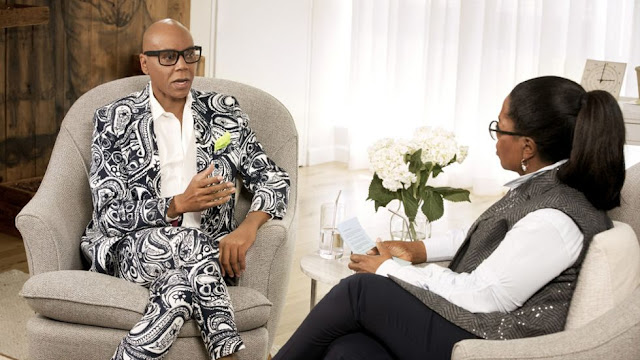 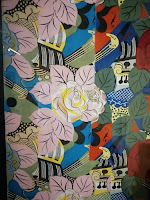 British commitment to artist textiles was remarkably successful into the 1950s. Despite political crisis and economic depression from the First World War onwards, textile manufacturers were not deterred.
Allan Walton Textiles and Edinburgh Weavers commissioned iconic artists of this period to produce work in textiles.  Through Edinburgh Weavers, artists such as Ben Nicholson were able to realise their graphic, dynamic works in both weave and print. 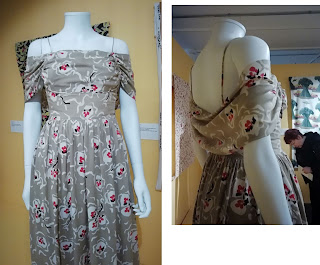 Brave New World
Hardship, political crisis and economic struggle dominated the early half of the twentieth century.  The textile trade became an important part of the national economic recovery after the Second World War,   Iconic artists' designs were central to manufacturers' success.  This work was rich, diverse and inventive and was received enthusiastically by the public.
Textile company Ascher  Ltd commissioned major artists, such as Henry Moore and Henri Matisse, to design a series of head squares and fashion yardage for the recovering couture industry.  Artist Graham Sutherland designed textiles for Horrockses Fashions as well as wallpapers and illustrations for books.  Cresta Silks produced block-printed fashion silks by artist Patrick Heron.  'Aztec' seen here is considered to be one of the most accomplished pattern designs of the following decade.

Fit For a Queen 1940s - 1950s - Horrockses Fashion
Dresses by Horrockes Fashion came to epitomise the traditional English summer frock.  Although popular and affordable, Horrockses dresses were often worn by celebrities.  At their peak, the company designed a collection of dresses for the Queen's coronation tour of the Empire and Commonwealth in 1953-1954.  The Queen's sister Princess Margaret often wore Horrockses dresses, as did Margot Fonteyn.
In 1946 the long established cotton goods manufacturer, Horrockses, Crewdson and Company Ltd, set up a fashion subsidiary, Horrockes Ltd mainly for the production of printed cotton dresses.  They engages painters Alastair Morton and Graham Sutherland to supply textile designs for the company. 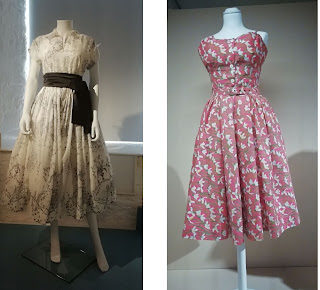 John Rombola's Circus (below) is a screen printed cotton furnishing textile by Patterson Fabrics Inc,, New York, 1956.  This is the first textile design by this New York artist and illustrator for Patterson Fabrics.  Rombola's designs were also available as wallpapers through Patterson's sister companies, Harben Papers and Piazza Prints.

This Is Tomorrow 1954-1960s Hammet Prints Ltd
Hammer Prints Ltd was established by avant-garde artists and designers to encompass all aspects of interior design.  They would create everything from furniture, to ceramics, wallpaper and of course, textiles.  This group produced radical and ground-breaking work based on new ideas and techniques. They showed examples of this work in the exhibition, This Is Tomorrow, in 1956.
The group was established by sculptor Eduardo Paolozzi and photographer Nigel Henderson.  Paolozzi and Henderson created designs from an assortment of  photographic material and images from popular culture and ethnographic sources.  The resulting patterns were then silk screened onto textiles, creating  some of the most influential designs of this period in Britain. 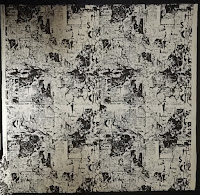 Modern Masters was a collaboration between Fuller Fabrics and some of the most internationally renowned artists of the 20th Century. They aimed to sell "art by the yard" to the American masses. Central to the projects success was the affinity between Pablo Picasso and Dan Fuller, owner of Fuller Fabrics.
Picasso had never before agreed to design commercial textiles.  It was certainly due to his involvement that Fuller was able to engage other important artists such as Joan Miro, Fernand Leger and Marc Chagall.  Fuller's intention was to produce fashion yardage on a vast scale, which the company planned to sell in the lower price range of $1.50 to $2 a yard.
Pioneers Of Pop 1950s to 1960s Andy Warhol and Zandra Rhodes
Andy Warhol, the epitome of Pop Art, worked in New York as an extremely successful graphic designer.  His textile designs are only now coming to light.  The collection here includes a group of food related 'Pop' textiles for his friend Stephen Bruce, proprietor of the legendary New York restaurant, Serendipity 3. 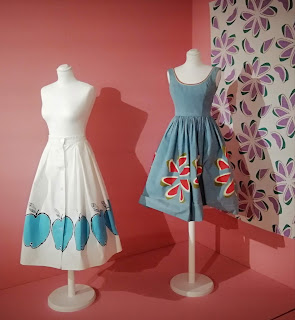 Zandra Rhodes is a hugely successful fashion designer whose works have been considered outrageous by traditional British manufacturers.  Her textiles draw on eclectic sources from commercial advertising to Australian indigenous art.  Despite her commercial experience and skill, she found it almost impossible to sell her extreme pop textiles to the mainstream fashion industry.  This inspired her to develop her work in a dazzling fusion of fashion and textile design.  Rhodes is the founder of the Fashion and Textile Museum with whom this exhibition was developed.

This textile design was originally shown at a 1944 Cotton Board exhibition and subsequently displayed at the Victoria and Albert Museum's exhibition "Britain Can Make".

Derived from a series of drawings and paintings Picasso  made of his "muse" and second wife Jacqueline Roque.