In 1950 Isaac Merritt Singer was working in Virginia, USA as a machinist for O C Phelps, the manufacturer of the Blodgett & Leriw sewing machine.  This was an early sewing machine that was not particularly successful.
Singer felt he could improve the machine and by September 1850 succeeded in producing the world's first ever practical sewing machine.  The machine was granted its American patent in August 1851 and I. M. Singer & Company began to manufacture their machines in a small workshop in Boston, MA, USA.  This was a labour and time intensive process and the company found it difficult to meet demand.  They had to expand and opened additional factories in and around Boston between 1858 and 1872.
During this period, Singer's industrial sewing machine market boomed with the need to equip American soldiers for the Civil War with uniforms. With new inventions in weaving looms and new manufacturing processes making cloth cheaper and more abundant, there was a gap in the market for a machine that could increase the manufacturing speed of clothing.

An opening was materialising also for the domestic sewer to use their skills and with the new, more easily available and cheaper material, could enhance their income by engaging in dressmaking and allied businesses and resulted in the start of the domestic sewing machine market.
The demand from outside America composed 40% of the company's overall business and Singer tasked Scot George Ross McKenzie (Company President) to look for a base in Great Britain which would act as "an export platform to supply the world market with sewing machines".

In October 1867 Singer's first overseas factory,can small assembly plant, was opened at 1 Love Loan, High John Street, Glasgow.  It assembled machines using component parts shipped from Singer factories in America.  Glasgow was selected because of its international reputation for shipbuilding, and shipping connections, cotton thread manufacture and iron smelting, global trade links and skilled, but low paid work force.
Demand continued to outstrip production and Singer rented a new factory in James Street, Bridgeton in 1869, where machines were made in their entirety and this led to an increased production from 30 machines per week to 3000.  Expansion continued and by 1881 it was manufacturing nearly 5000 machines per week and employing 2000 staff.
The Glasgow Evening News reported in 1877 a waiting list for Singer sewing machines of 40,000.  Clearly, further expansion was required.
Singer purchased over 46 acres of farm land at Kilbowie (now known as Clydebank) for around $65,000 in 1881.  This new manufacturing plant would reduce existing production costs by 30%™and increase production capability.
There appeared to be no end to the ever increasing demand for sewing machines, especially Singers, the leading brand.  As demand continued to grow, so did the factory which was expanded over the next 30 years.
The Clydebank factory was a key player in the sewing machine industry on a global scale.  At its production peak in 1913 the factory had grown to occupy a site if over 100 acres, more than double the initial area of land purchased in 1881 and in 1913, shipped over 1.3 million (1,301,851) sewing machines from its factory doors around the world with help from its 14,000 employees. Of these 14,000 employees a significant number were women.
The Needlewomen
Singer employed over 75% of the available female workforce in Clydebank. This was very unusual for the Victorian era, when working men outnumbered women in the burgh by 6:1
The female workforce was also limited to unmarried girls.  Once married women were expected to stay at home and look after the children.
Singer therefore played a very important role in the female job market in Clydebank, providing jobs for many of those females resident.  The 1911 census shows that 43% if women aged 19 or under and 84% of women aged 24 or under were employed in the engineering and metal working sectors. In 1911 1159 women in total were employed at Singer from Clydebank, Glasgow and surrounding areas.
Working outside the home brought more than just financial benefits for girls - they could get out into the world, achieving the status and attached independence of a wage earner and they had the company if their own age during the day.
A very rigid sexual division of labour existed within the Singer plant with women being almost entirely excluded from the more highly paid, skilled and more interesting work tasks.  This, despite being highly valued for their superior manual dexterity when carrying out fine work.
It has been suggested that factories like Singer, bred young women who tended to be more self confident than their sisters in domestic service.  These girls mostly in their late teens/early 20s were more likely to speak out if they perceived an injustice.  This was to be a significant driver in the trouble brewing at Singer during 1910 and 1911.
Early in 1920 a complaint was brought before the local munitions tribunal for the Western Division of Scotland by the Workers Union (of which the pursuer was a member) against the Singer company, to the effect that a 5/- a week award was not being paid to the female workers in the factory at Christmas.
The complaint was proved.  The company appealed and won.  This scenario played out over a number of years and although the female employee was awarded reparations in 1922, by 1923 the company was acquitted of any breach of law.
This shows the extent to which women were forced to battle for equal pay.  Despite these pay battles, Singer continued to employ a large number of women, 3,500 on average throughput the 1930s - just under half the total workforce.
at January 31, 2019 No comments:

Ahead Of The Game

Over the last few issues since summer 2018 Westender magazine has been showing the new trends just as soon as they start coming into the stores in Glasgow city centre.

It's really good to be ahead of the game and show the trends as they emerge, and seeing the new pieces in the shops  always gives me the nostalgia of getting excited about fashion for the first time.  We did the March April fashion shoot last week in a gorgeous building in the city centre and the trend we went for was suits - and already there are lots of really nice ones available in major shops.  One I didn't get to use was a gorgeous snake print one from TopShop's Love concession, go take a look at it for yourself.  Next have a gorgeous yellow one I'd love to have for myself, and I did keep the green floral one from ASOS, I'm looking for the right opportunity to wear it as soon as possible and there might be that chance sometime soon.  Colour combinations are easy to make up shopping in different stores, a blouse from Next went really well with a suit from TopShop, and a shirt from Cos in Princes Square went particularly well with the floral suit.  I had a black and white stripe ASOS suit, and put a bralette from a new designer, Bonnie Lawson-Brown who lent me the prototype more or less straight out of the seamstress' hands!  This was one of  my favourite shoots for the styling I pulled and the location we shot, so I can't wait to see the issue in print at the end of February.

Westender fashion was shooting the trends ahead of schedule last summer with the animal print trend, so that when the magazine came out and gave the readers some inspiration there would be lots of choice in the shops in the west end, city centre and online. 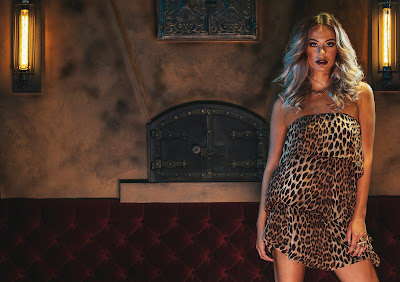 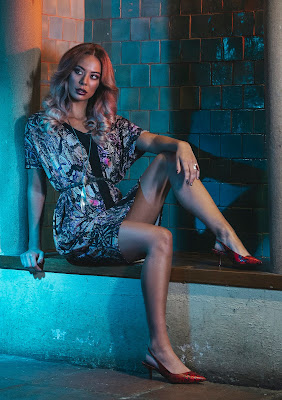 I'm hearing really nice compliments about the styling from various people like collaborators in the Scottish creative industry and from the managers and staff in the shops I borrow pieces from which is great!  So, I'm looking forward to keeping going and bringing the trends to the magazine pages as soon as they start to happen, and let the trends unfold as the season progresses.  It's exciting!
at January 31, 2019 No comments: