After the introduction of the metallics trend is the continuation of fashion embracing science where we see the constant experimentation with fabrics, shapes, patterns, embellishment and ultimately, identity.  From Chanel’s space themed show with many references to spacesuits and rockets to work by a number of new designers this is escape from planet earth to augmented reality.  The Strange Nature story from WGSN particularly plays with the concept of going beyond organic with intensified colours and natural motifs such as florals to make dramatic feminine looks.  Knowing transhumanism is a developing concept it’s interesting to see how fashion is proceeding towards the brave new world. 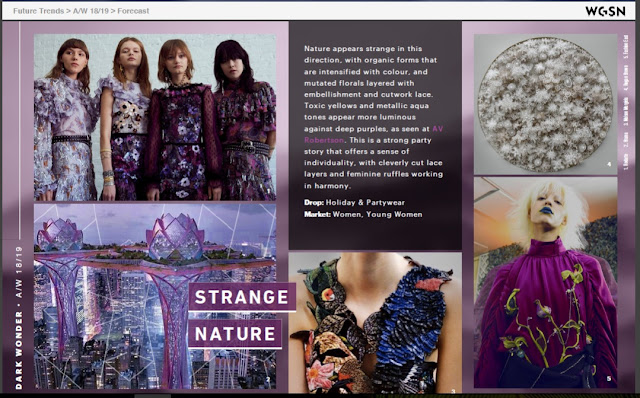 We’re all going to live with the future of artificial intelligence.  Fashion is introducing it into our lives as tactile and attractive, with the lure of luxe fabrics and opulent embellishment to increase the appeal to flatter our sense of self being able to indulge in luxury and taste with an open mind to the future.  The mainstreaming of fetish could be interpreted as somewhat dehumanising and sinister; the jewelled masks covering the faces are definitely removing the human element, the jewel over the mouth reducing the capacity for verbal expression, keeping the wearer mute; a sinister aspect of transhumanism.

The Urban Warrior theme is very Mad Max, post-apocalyptic and each fashion story is like a scene in a script of the future concluding with aliens and super natural surreality.  Are the metallic fabrics meant to be interpreted as a shell or exoskeleton?
Looking at the upcoming fashions as purely style, they are beautiful, seductive, sensual – a real fantasy where the imagination will be allowed to go into overdrive to create characters in theatrical fashion show presentations, and for a few, to develop self-awareness and enhanced personas.  Looking at some of the emerging designers, who comment on society, culture etc, I can see their new collections being an eccentric expression of future forecasting and I really look forward to that.  Seeing how it filters down to the high street will be interesting, the original strong meaning may be lost but somehow an understanding will be impressed in psyches and consumers will hopefully interpret it effectively.
The Hyper-Human theme creates a human-meets-machine aesthetic, inspired by motorcycle design and sci-fi movies; in Future Fetish higher necklines and long sleeves provide a more accessible way for people to wear this look.  Urban Warrior is inspired by cultural movements such as Futurism. Layers use waterproof and heat-conserving fabrics for the survivalist. 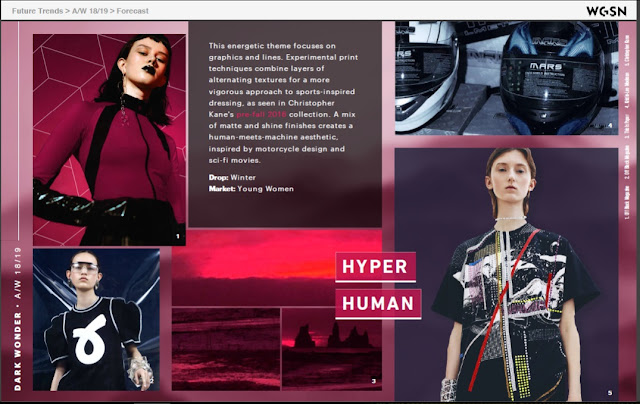 I can’t help seeing this as the representation of the bigger picture and how it’s being introduced to people’s lives.  As the ways for real self expression through talent, skills and thoughts are reduced, the methods of expression via use of the ego are becoming more concentrated; and we’re going to be judged on how attractive we are, how validated by others rather than having fundamental characteristics of a personality.  Just when you thought we’d got past that stage of low level consciousness it comes bouncing back.
Looking at the categories and descriptions of this trend it seems to be that alternative culture and art is becoming mainstream:  The positive side of transhumanism for people who wish to and are able to effectively express themselves is the cyber-creative.
Recent Heriot Watt graduate designer Hayley Rebecca Muir is influenced by nature and taking the natural world into future fashion, showing how creativity can be directly connected to the natural world with a timelessness reference to our ancient druidic and pagan past.
She's considered the influence of earth science, connections of landscapes, and formations of natural movements, shaping and formation of the body taking on traditional craftmanship fusing with innovative design in down to earth styling and editing creating rustic minimalism that is both timeless and futuristic, helping to portray your own personal character and have your choice of first impressions.
This shows the possibly subconscious resistance to technology overtaking the natural life force, how you can’t separate being creative from being truly human, utilising motivations and responses from our minds and our natural-world surroundings.  We’re organic beings and need a connection to our environment.
Another Heriot Watt designer Lucy Graham has described her concept poetically:
DOUBLE II
We are born as individuals, we grow embracing our unique identity
our unique features, bold ways, and beautiful markings
embracing all that we are, as we are, for who we are.
A lifetime of freedom, freedom to embrace
expressing ourselves in our own skin, finding ourselves
time is constantly changing and we are constantly chasing
but let we be reminded that Age is just a number
we will grow old and hold on to being bold no matter what the number
Fashion is my armour, but style is my identity.
My second skin to express my inner beauty
I modify and manipulate for you to see who I want to be
I have the option and the freedom no matter what my number
No rules, no boundaries just styled to suit me
So, remember that my number doesn’t make me invisible
I’m only wiser can you see age does not make me invisible
that real identity is built through style, which comes with age and wisdom.
I’m growing older and my wardrobes just getting bolder
Because fashion helped me be, and you to see the beauty within me.

A further designer to include in this cyber creative category is A V Roberston, whospecialises in embellished womenswear and accessories which launched in 2015 by Amie Victoria Robertson.  The London educated designer studied at Central Saint Martins College of Art and Design, graduating in 2014 with her unusual collection​ combining black oversized polo necks with cut out sections, clustered with hand made iridescent flowers.​  Her London Fashion Week debut in February 2016 with Fashion East attracted American designer Marc Jacobs to check out her 14-piece collection for Autumn Winter 16. The Show styled by Katie Grand was presented at The Tate Britain. The Designer based the collection on 'Alien wanderers falling to Earth,' their iridescent spores germinating in Earth's fertile atmosphere, bursting through seams and spreading across the backdrop of veering stripes and the collection signified the brand's trademark aesthetic, combining contemporary embellishment specific to the brand with casual, modern silhouettes.  She has also created a capsule collection for ASOS Black.
This aesthetic captures my styling imagination and interest in sociology, and one of my favourite styling stories is the future druid, taking the ancient lore of a spiritual race and showing how it is contemporary and beyond, relevant to a natural creative motivation which it’s clearly demonstrated is alive and kicking. Below are images from a shoot based on this concept. 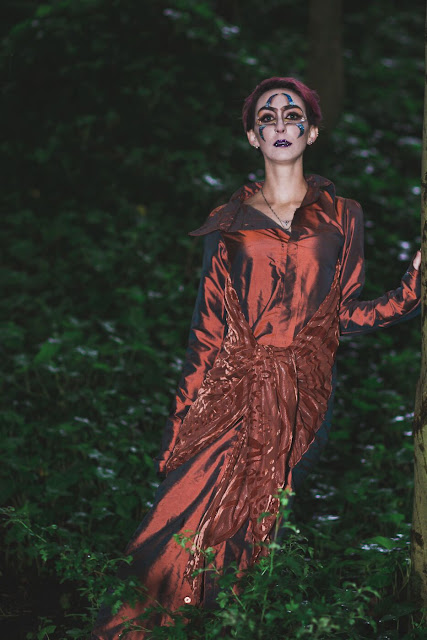 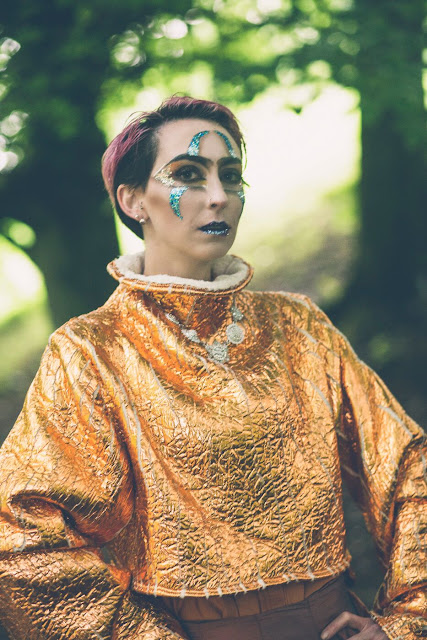 Photography by Duncan Holmes, Make Up by Kirsten Hendry, Model Raya Mutch
at June 15, 2017 No comments: