Slogan t-shirts - black text on white cotton like newsprint - can be as powerful as any headline.

We’ve just seen the political slogan trend reminding us of the potency of the fashion runway as a medium for protest showing clothing as an expression of identity and beliefs. Fashion reflects culture as a response and a relevant progressive art form like music. It’s no longer frivolous – if it ever was - it is a reference of mass consciousness which trend influencers develop so clothing has a voice rather than being the mute accompaniment to words; it's a character in the theatre, not only the costume.

As Elle reported “it appears the fashion industry isn't holding back when it comes to expressing its political views on Trump, reproductive and immigration rights and diversity during fashion week.  From Tommy Hilfiger to Calvin Klein, designers are standing up against the Trump administration with fashion, music and art. Subtlety is nowhere to be seen”.

T-shirts have been emblazoned with slogans and symbols for decades, starting in the 60s and being a huge trend again in the 80s with Katharine Hamnett, Wham, Frankie Says etc. In addition to slogan t-shirts campaigns for change have been championed by high profile people in popular culture like Vivienne Westwood and Anita Roddick of The Body Shop and more recently the Chanel protest show.

In addition to actually writing words there is the traditional context of patterns and print, such as tartan, which is “a unique textile in that it has so many meanings attached to it… It can represent rebellion, conformity, homeliness and performance, and this is why it has been consistently popular in fashion around the world since the late eighteenth century. While tartan was a symbol of the Jacobites to indicate loyalty to the Stuarts, it later became incredibly fashionable when taken up by Queen Victoria, as before Hollywood and pop stars, it was royalty who were the trendsetters" says Edinburgh-based fashion journalist and author Caroline Young. Slogans are instantly understood as the meaning of symbolism can get lost but if you know your history you will read between the lines and add impact to your expression.

Prabal Gurung has dressed some of the world's most famous and influential women including Michelle Obama, Demi Moore and Oprah Winfrey and has expressed a desire to dress Prince William's wife, Catherine The Duchess of Cambridge. "The women I like dressing always have to have a strength of mind and real character,"

In the first of the fashion weeks he made a strong case for fashion as resistance statement taking his bow in a T-shirt reading ‘This is what a feminist looks like’ and used the finale to express his politics with models wearing T-shirts reading ‘Revolution has no borders’, ‘I am an immigrant’, ‘I am a Rosa’ and to promote a fuller-figured catwalk model, casting Candice Huffine and Marquita Pring in the show. The clothes continued his strong woman theme with chunky wool sweaters and coats with quarterback shoulders alongside elegant materials and delicate colours, conveying a sense of female authority without the tired ‘sexy-equals-empowered’ concept.
New York-based fashion label, Creatures of Comfort models wore silk-screened T-shirts with, 'We Are All Human Beings', written across the chest, highlighting unity in defence against Trump's divisive ideologies. 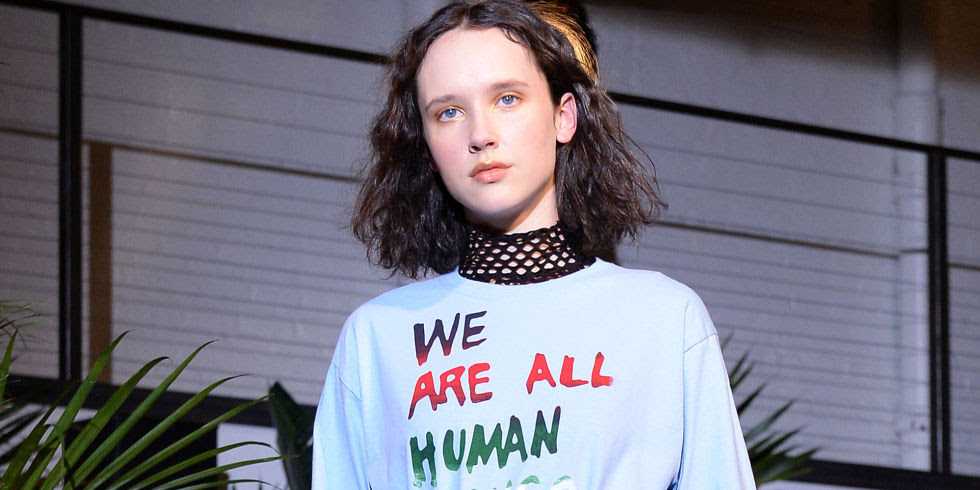 At Calvin Klein, Raf Simons Reimagines America complete with very cool denim, playing David Bowie’s “This Is Not America” during the finale – is this officially the era of 'fashtivism'?
Unfortunately politicism is being sold as a trend – commercialised and marketed and therefore diluted rather than having strong passion with a need for progress. I-D spoke to Bertie Brandes, freelance journalist, about Dior's "we should all be feminists" tee. "If fashion is the commodification of aspirational trends, which it is, this is a perfect example of a perfect product: aspirational in both price and politics," she explained. "That T-shirt is a hilariously sharp if unconscious depiction of how capitalism as an ideology will hijack literally anything to appear relevant."
On the other hand Ashish’sAW17 show was a symbolic collection full of meaning with Wizard Of Oz themes and a giant broken heart and Mary-Kate and Ashley's Olsen’s clothing line The Row made a quiet statement with the understated word 'hope' embroidered  on the cuff of their shirts in a mark of hushed defiance.

Elle summed it up quite nicely with a quotable summary “It appears politics is being stitched into the very fabric of the fashion industry this season.  May it long continue”.
There’s a book Slogan T-Shirts Cult and Culture which “offers a multi-faceted approach to the question of what makes the slogan T-shirt so rich, layered and culturally relevant... because slogans are never simply just words; they are emotive and evocative, suggestive and provocative".